How do we see the development in automation and what is the future of robots in the Czech Republic?

B:TECH part of the virtual debate with Hospodářské noviny. Mr. Igor Zahrádka, CEO of our company B:TECH, also accepted the invitation to join the debate

Companies are increasingly switching to automation. What is the future of robots in the Czech Republic?

Czech industry is doing very well with robotics. The last decade of work automation in Czech companies has experienced a boom. According to statistics, three times more robots are involved in processes today than in 2010. According to the International Federation of Robotics, the Czech Republic was the 15th country with the highest increase in the number of robots in the world. The professional magazine Strojírenství informed about this fact.

So far, robots have appeared mainly in larger companies, which use them to optimize production demanding speed, accuracy and quantity of finished products.

But maybe it's time for smaller companies to get a taste of automation. Where else but in a country where so much emphasis is placed on industry and export.

The question is where automation can help. In which sectors can we involve robots in work? What types are available? How is automatic production planned and maintained? What about employees? Do they have to worry about their positions? Are they threatened by being once replaced by machines, or, on the contrary, will their work improve and work side by side with their mechanical colleagues? This will be discussed in the virtual debate of Hospodářské noviny.

Invitation to the debate was accepted by:

Igor Zahrádka, CEO of our company B: TECH,

Pavel Ambrož, Authorized signatory of the Czech branch of Schunk,

The virtual debate will take place under this article link on Wednesday, March 24 from 2 p.m.

An article on iHNEd about the debate can be found here

An article in Hospodářské noviny can be found here 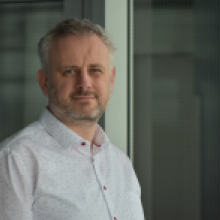 He began his almost 30-year-experience in the field of automation by founding his own company, which he run until his Army duty. Since 1995, he worked at the Dukovany Nuclear Power Plant for I&C Energo. In 2004, he joined B:TECH, a.s, an engineering company from Havlíčkův Brod, where he has held the CEO position since 2011. As part of his role, Mr. Zahrádka supports activities focused on technical education, internal development of engineering know-how and popularization of technical fields. The company began implementing a regular three-hour interactive program for primary and secondary school students, opened an electrical engineering club and started focusing on supporting secondary vocational education in the region through an internal educational institution called  AUTOMATION ACADEMY. His interests include constructing locomotive models. Overall, he is interested in the history and present of technology and technical-popular fields – cosmology or quantum physics.

Will robots replace us? Will covid speed up automation in companies? You asked the experts

Industrial robotic automation has been a major business topic for several years, but the pandemic has strengthened the importance of automation. Are we facing job losses or the creation of some new ones? What will artificial intelligence do with the job market? And is the Czech Republic well prepared for these changes? Record from last debate from 16.9.2020 can be found here