Petr Pavel, retired Army General, former Chief of Staff of the Army of the Czech Republic and Chairman of the NATO Military Committee, visited the Vysočina region on Thursday, June 9th and Friday, June 10th. During his trip, he also met with employees of our company and representatives of the private and public sectors in our region. As part of his trip to Havlíčkův Brod, three meetings took place.

DISCUSSION ON UKRAINE AND MODERN LEADERSHIP

The first meeting was dedicated to the topic of leadership and the power of values in business and took place on June 9, 2022 in the afternoon at our headquarters. The discussion was not only about the current situation in Ukraine, but also about the general geopolitical situation, the principles of NATO, the way of leading a modern army and the transferability of these experiences to the economy.

And what has proven itself in leadership to General Pavel himself?

This was followed by a meeting with representatives of the Havlíčkův Brod District Chamber of Commerce in the hotel Zlatý Lev on the topic of cooperation between the public and private sectors. The discussion also touched on the principles of the functioning of states and the principles of markets. We also thought together about personal courage, the readiness to defend the state or the role of creativity in the army.

The third meeting with employees of our company took place on June 10 in the morning. The opening speech was dedicated to the current situation in Ukraine, the overall geopolitical situation and the ongoing discussions in the European and national public spheres about strategies towards Russia.

Our colleagues were interested in the background of how NATO works, the state of the Czech army, the mood and awareness of the ongoing conflict from the Russian citizens' point of view and what they can personally do to help in this situation.

THE CENTRE OF EUROPE AND THE LOVERS OF JÁRA CIMRMAN

As a great lover of Jára Cimrman's work and humour, General Pavel did not miss the opportunity to visit the CENTRUM EUROPAE memorial, which is located in the garden of the U Notáře café in Sázavská Street in Havlíčkův Brod. The evening programme prepared for the representatives of the region included a guided tour of the centre of Havlíčkův Brod with an interpretation by historian Mgr Alena Jindrová from the Vysočina Museum of Havlíčkův Brod, during which we were reminded why the fountain on Havlíčkův Square is called the Koudel Fountain and what is behind the fact that no one calls the skeleton on the tower of the old town hall anything other than Hnát. 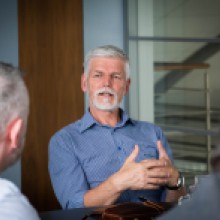 "During my visit to B:TECH, I was very impressed by the pleasant atmosphere that prevails there, as well as the relationship that the company has with its employees. I rate the visit very positively and am glad that I was able to meet not only the management but also the employees. I enjoyed a guided walk through Havlíčkův Brod, where not only the houses on the square have been beautifully and sensitively restored. I will be very happy to return to Havlíčkův Brod."

Petr Pavel founded an initiative Spolu silnější in spring 2020, initially in the form of a collection to help people in the first line in the fight against epidemics and those most affected by the crisis. Later, he worked out recommendations for better crisis management with experts and is now striving for a thorough overhaul of crisis management in our country. He strives to lead by example when it comes to active citizenship and volunteering. This was the main reason for his trip to Vysočina. Thank you very much for the updated information and the inspiring meeting.