On Saturday, September 25, 2021, the 9th half-marathon of Havlíčkův Brod took place. This year's event was also the veteran championship of the Czech Republic in this discipline, so fighters from practically all parts of our country came to Brod. The weather was good and the atmosphere was perfect. The main race started at 11:00 am, the relays at 11:10 am. The whole event started with a children's run. The main route led again via Havlíček Market Square. B:TECH, a.s. and B:GROUP are still partners of the competition, the foundation stone of which was laid in 2013 by the founder of our company Ing. Antonín Urban.

The talented Czech endurance athlete Moira Stewartová took part this year as the starting runner and supported the idea of "sport for the whole family" as she travelled with her whole family. The race is traditionally not only for professional and amateur athletes, but also for the general public. Those who did not dare to run the whole distance could take part in the relay race. This included a 5.2 km fun run. There were also races for children. We have regularly participated in this event since 2013. This year, the colleagues ran on the course as part of the main race and the company relays.

A HEALTHY MIND IN A HEALTHY BODY

Behind the foundation of the half marathon in Havlíčkův Brod was the Sokol idea of "A HEALTHY MIND IN A HEALTHY BODY". At the very beginning, in 2013, there was an enthusiastic runner. He managed to transfer his enthusiasm for running to his colleagues, and so B:TECH organised the first company run for its employees and business partners, which included a half marathon, relay races and children's runs. The feedback from the track was very positive and so the next year was opened to the public. The number of fans of running in Havlíčkův Brod and its surroundings is growing year by year and we are very happy about it. 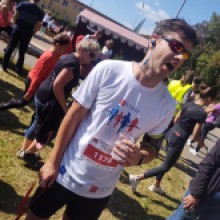 CONGRATULATIONS FOR THE FIRST TIME IN THE MAIN RACE

Our colleague David Stránský, a software specialist, represented our company on the main circuit this year. He ran the entire 21.1km course for the first time and successfully completed it in a time of 02:04:14. "The spectators on the course created a great atmosphere, the organisation of the race was very good and so it almost ran itself,"David adds of the race. The photo shows David shortly after he reached the finish line. Congratulations on reaching this milestone.

For us, a reliable team means that we do not "let each other down".  This is not only true when working on our projects, but of course also during sporting activities. 3 of our teams took part in this year's 4 x 5.2 km relay race:

Even among the children we had our hot handcuffs from our colleagues' children. In the children's races, the young runners can participate in different categories:

The weather was goog and the atmosphere was great

This year's event took place in an excellent atmosphere. The event also featured music, with a performance by Moira Stewart's brother, Gerron Stewart. The concert was streamed via Spotify. Refreshments and an accompanying programme were prepared by partners for the participants and visitors.

A total of 493 runners took part in the race this year. Many thanks to the organisers for their preparation, to all our participants for their representation and to the fans for their support. WE LOOK FORWARD TO SEEING YOU ON 10. ANNIVERSARY RACE TO BE RUN AGAIN NEXT YEAR Details of the race can be found at https://www.hbpulmaraton.cz/